Alabanda, the city of wealth and pomp

Alabanda is the city of culture, wealth and pomp. Ancient writers who lived 2000 years ago talk about the people of Alabanda living in pleasure, pleasure and prosperity. The city, which has an intellectual society, has trained architects, orators and artists; The occupations of these people are written on the tombstones. It is seen that people with many business lines such as physicians, architects, teachers, bankers, merchants, leech sellers and street lamps are seen. The people of the city, who extracted valuable ores from its mountains and processed them and turned them into jewels, lived in prosperity and the city became an important center for precious stone auctions. While walking among the ruins of Alabanda, the intellectual city of culture and entertainment, visitors will find the opportunity to experience the past in their minds, following the traces of the prosperity and pleasure that once lived. The temple of Apollo, the ancient theater with double diazomas, the bouleuterion (city council), the city gate and the baths in Alabanda are among the ruins that can be seen clearly. In addition, towered walls, agora and mausoleums from the Hellenistic and Roman periods, and an aqueduct dating to the Roman period await visitors in the city. The movable artifacts found in Alabanda excavations are exhibited in Aydın Archeology Museum. Aydın province, approximately 7 km from the district of Çine. The ancient settlement to the west of the city is located to the west of the Marsyas (Çine) Stream and is one of the most important ancient cities of Inner Caria. 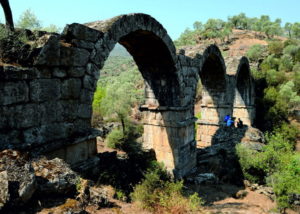 The oldest information about Alabanda goes back to the Hittite Kingdom, which ruled in Anatolia 4000 years ago. Alabanda was known as a large Phrygian city during the Greek campaign organized by the Persians in 480 BC, which was established on the territory of today’s Iran. We know that 200 years later, it was a member of the Union of Carian Cities, and 100 years later, the name of the city was changed to Khrysaor Antiokheia during the war. After the Peace Treaty of Apemeia (188), Alabanda returned to its original name, came under the rule of Rhodes, and finally Alabanda became a free city 2 thousand 100 years ago. During the Christian era, Alabanda lived as an episcopacy center affiliated to the Aphrodisias Metropolitan.

The first excavations in Alabanda were carried out by Halil Edhem Bey in 1904-1905. Excavations have been continued by Erzurum Atatürk University since 2015.

The total length of the fortifications of Alabanda is 4.5 – 5 km. The walls, which are in harmony with the structure of the land, take the city under protection. These walls were renewed three times throughout the history of the city.

The fact that the rows of seats exceed a semi-circle indicates that the theater was built in the Hellenistic period. The existence of a wall built with irregular workmanship between the orchestra and the rows of seats tells us that the theater was used for the fights of warriors called “gladiators”, which were formed from captive soldiers and slaves, for fighting with wild animals and playing water games. Alabanda Theater is thought to have a capacity of 6,200 (according to measurements made on site). 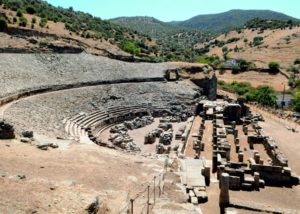 The bouleuterion (Parliament Building), one of the most important ruins of Alabanda, draws attention as a rectangular planned structure. With its dimensions of 26x36m, it has survived to the present day largely intact by resisting time. It is thought that the Greek letters on the blocks on the walls of the bouleuterion, where the city council was gathered, with curved rows of seats, indicate the master or workshop.

The Doric temple, which was unearthed during the excavations carried out by Halil Edhem Bey in 1904, is 200 meters from the theater. It was built on an artificial terrace to the northwest. The peripteral temple, which consists of a pronaos and a cella with 6×11 columns and an opistodomos, must have been from the middle of the 4th century BC, according to its construction technique, workmanship and unearthed finds. 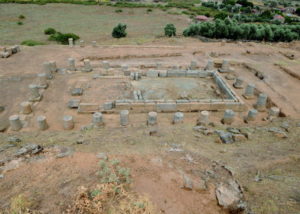 One of the important structures of the Alabanda Ancient City is the agora (bazaar, market place) just south of the Doğanyurt village road, and it was unearthed in 1904 by Halil Edhem Bey.

You can reach the ancient city by minibuses, minibuses, or your private car from Aydın city center, and after arriving in Çine district, by minibuses from Doğanyurt, Esentepe, by taxi or by private vehicle.