The prophecy center where the kings and emperors consulted for thousands of years, Apollo

Didyma is a sacred place dedicated to Apollo, the God of Light, Knowledge and Light Mind. In this area, which is shaped around a magnificent temple, apart from the temple, there are small religious buildings and buildings used for daily life. Didyma is a dazzling ceremony with its 2,300 year old monumental ruins which is hosts to one of the biggest temples of the ancient period. The Holy Sanctuary of Apollo has become a religious center that directs the history with the prophecies given by the priests for thousands of years where ordinary people, kings and emperors consulted the intellect.

An unforgettable experience is waiting for visitors in the monumental temple of Apollo which has been built for 500 years and has never been completed. While visiting the intact temple, it offers visitors the opportunity to experience history and travel through time.

Didyma Ancient City is located in Didim that is one of the most important tourism centers of Aydin.

Miletus was one of the most developed cities in trade, culture, art and philosophy, and today’s Didim was a worship place connected to the city of Miletus. The Didyma Sanctuary, which belongs to the port city of Miletus, was connected to this city by the “Sacred Way itibaren since the 7th / 6th century BC. Didyma was famous for the Sanctuary of Apollo that considered one of the most well-known divination centers of ancient period. The Temple of Apollo was active to meet the demands of many people from different regions such as praying for the security of the gods, offering sacrifices, organizing events such as festivals and races and most importantly learning their future and finding solutions to their problems which was established there. Temple was called Didymaion. During the Archaic period, the temple of Apollo was visited by many rulers, including Croesus, King of Lydia. As a result of the attacks of the Persians in Anatolia in the 5th century BC, the Persian King Darius destroys the temple with its settlement. The temple remains in ruins for about 150-180 years after this attack. After the victory of Alexander the Great against the Persians, the reconstruction of the temple was started. The collapse of Didyma began with the increasing attacks of invading peoples groups (such as the Goths’ invasions) in the 3rd century AD, who carried out threats and destruction in the Roman Empire. The present remains are unearthed during the excavations carried out by the Germans in 1924-1925.

It is considered one of the best preserved temples of ancient times excavated between 1906 and 1913, the temple was completely unearthed and partially exposed again. The construction of the building, which is seen today but never completed, started in the 4th / 3rd century BC. Two frieze blocks with Medusa relief are displayed on the roof next to the entrance ladder. 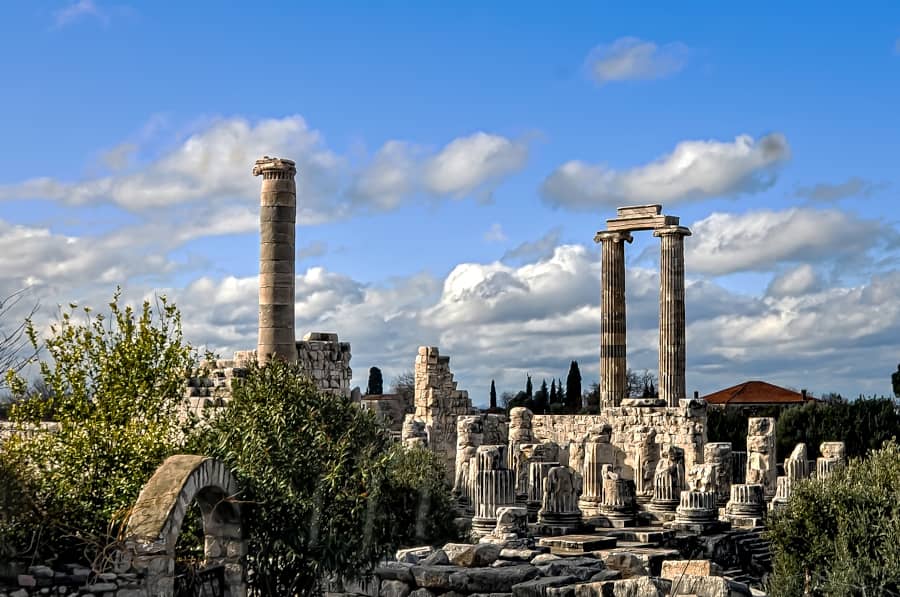 Medusa is one of the most important symbols of Didim which is exhibited at the entrance of the Temple of Apollo. According to the belief, Medusa, a beautiful young girl in her youth, was turned into a terrible gorgon girl with snake hair who turn people into stones by jealous gods. Medusa, a mortal under ground female monster, is beheaded and killed at Athena’s request. Medusa figures were used in ancient times to protect large buildings and private places such as temples from evil, as well as to make people to think again before they do evil things.

Didyma which is considered one of the most well-known divination centers of the ancient period has gained importance with a monumental temple structure since 6th century BC. Didyma, which has one of the largest temples of its time, was worshiped by Apollo as well as other gods, some with their own cult structures.

Because of the continued spread of Christianity, the cult of prophecy has become undesirable. Finally, the Emperor Theodosius M.S. Following the decree, which confirmed the complete prohibition of pagan cult in 385 and 392, Christianization gained its most prominent form by the construction of a basilica (5th / 6th century BC) in the inner courtyard of the Temple of Apollo. 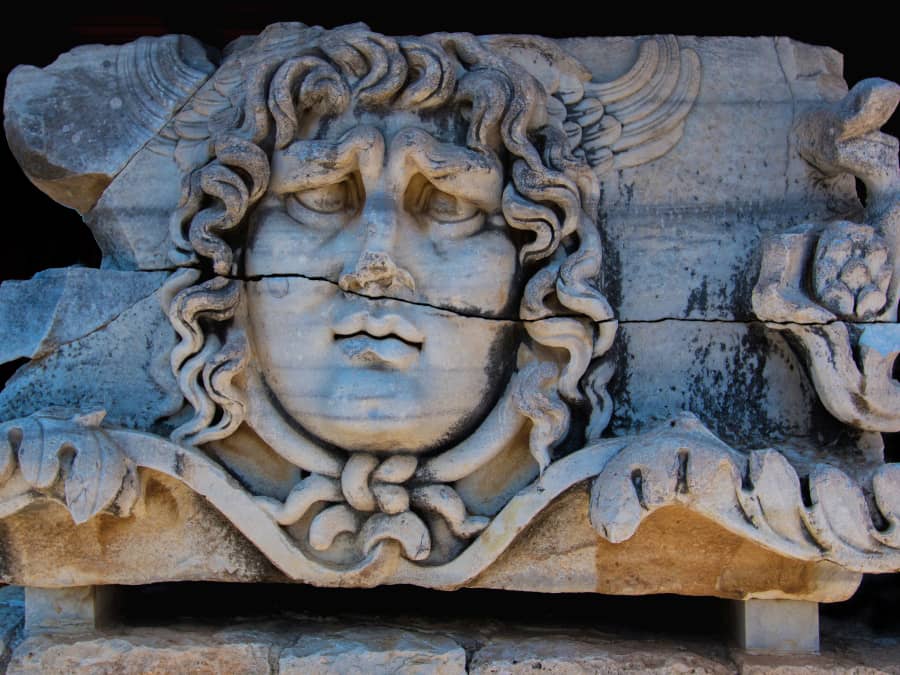 A temple with its foundations directed towards the east was discovered just north of Hisar Mosque in 2013, but the basic plan of the temple has not been understood yet. Based on our present knowledge, it was probably built during the Late Hellenistic period. It is possible to associate this new cult structure with the sister of Apollo, Artemis, as the possible building elements belonging to this temple resemble the Apollonnaiskos in the central courtyard. The connection of these newly discovered foundations with the remains under the mosque has not been explained yet.

The last part of the Sacred Way’s return to the Didyma Sanctuary was covered by stone blocks in the 1st century AD by Emperor Trajan. In the second half of the 4th century BC, the abandonment of the structures lying on both sides of the road and the destructions it can be detected can be determined by archaeological data. A new arrangement was made in the area in the 6th century AD. Thus, the level of the road is raised again and a new stoa with effective architecture is built along the western edge of the road. In this way, the main road and its environs have a city-like appearance for the last time before being completely abandoned in the mid-7th century AD. 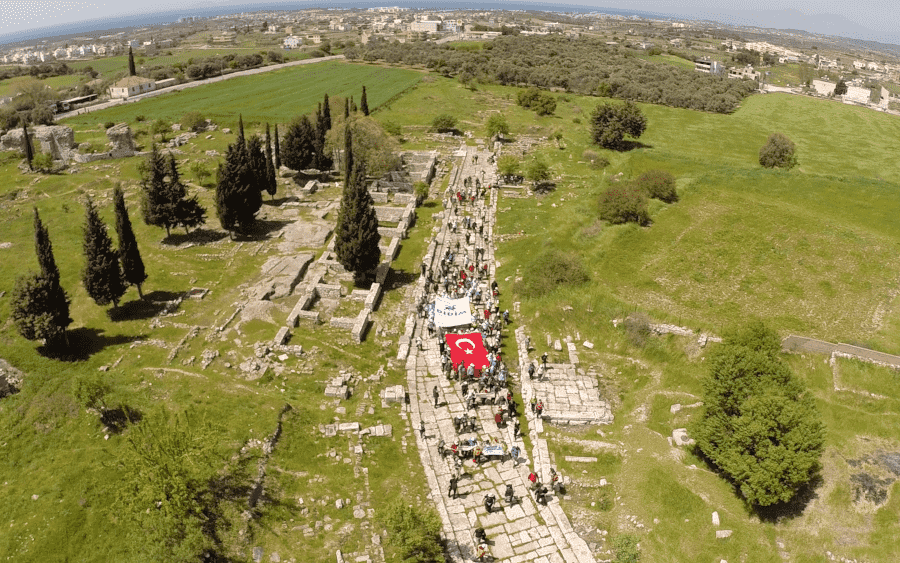 There is a stadium in the south of the temple. The stadium was used for competitions, possibly an integral element of festivals associated with religious holidays since the beginning of the 3rd century BC. Only two rows beneath the rows of seats belonging to the grandstand built against the steps of the temple have survived to the present day. If the height of the terrace limiting the back side of the tribune is taken into account, only seven to eight rows of reconstructions are possible. Remains of steps were found only in a section of the tribune which ends with exit stairs. The sitting steps to the west of the tribune have been completely destroyed.

Between 2013 and 2015, the foundations (11 x 12 m) of another monumental building, probably built in Roman times, were discovered under the ruins of a chapel that was used until the 1920s, about 60 meters east of the theater. The reconstruction of the structure and its existing architecture remains controversial. The foundations of the building were re-filled for protection.

Hisar Mosque was built as the central church of the village in the 18th century which is located in the center of the ruins. Today there are many spolie materials belonging to ancient buildings. Furthermore, the church structure was built on the ruins of an ancient foundation. During the renovation of the mosque floor in 1994, a small part of this ancient foundation plane, which can only be seen for a short time, is now visible with a window formed on the floor inside the mosque.

In addition to municipal buses and minibuses departing from the city center of Aydin, visitors coming from Izmir can also reach the ancient city by Didim minibuses from Soke.

The museum is valid at Didyma Ruins. However, the entrance fee is 15 TL for 2019 for those who do not have Museum Card.