Here a group of works belonging to cultures living and developing in this unique geography were taken under protection in the People’s House and formed the core of the Aydin Museum. 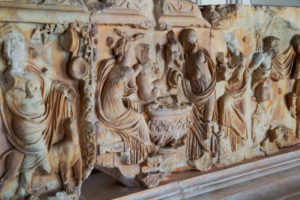 The Aydin Archeology Museum which was planned to exhibit the archaeological cultural heritage uncovered as a result of scientific excavations within the borders of Aydin, was established with a contemporary museum understanding on an area of ​​15 thousand 769 square meters on Aydin-Denizli highway. The building has been constructed as Basement + Ground Floor + One floor which has exhibition halls, warehouses, laboratories, library, children’s activity section, conference hall and temporary display areas and other service units. In the garden arrangement, open display areas were created by shading with suspended-stretching membrane system. 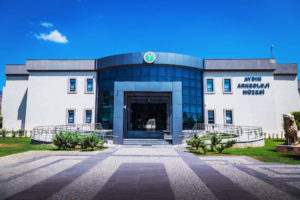 Tralleis, Magnesia, Alabanda, Nysa Archaic Panionion, Kadikalesi (Anaia) which are in the area of ​​responsibility of the Aydin Archeology Museum, are exhibited in the area of ​​Alinda, Amyzon, Piginda, Harpasa, Mastaura, Akharaka, Pygale and the artifacts obtained from the rescue excavations carried out by the museum. In the garden exhibition, stone artifacts from the ancient cities within the responsibility area of ​​the museum are exhibited.

Be carefree as long as you live

Don’t let anything upset you

And time is conceive with everything.

It is the oldest written poem in the world of 2000 years which is written by Seikilios of Tralleis on his grave stone which was made for him during his health and then converted into a tune with 6/8 note sizes.

Late Chalcolithic, Old Middle and Late Bronze Period terracotta idols include bone tools, stone axes, flint and obsidian arrowheads and piercing tools, and terracotta seal prints dated to the Late Bronze Age with Hittite hygrolif signs. These seal pressures are important in terms of the existence and influence of the Hittites in Western Anatolia. 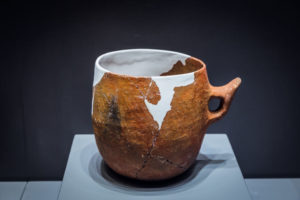 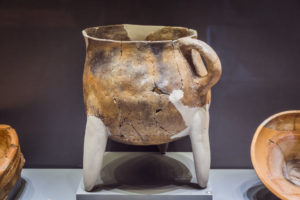 The prehistoric terra cotta pots, stone axes and spindle whorls as well as the bronze Hittite statuette are exhibited in a special showcases containing the finds obtained during the excavations at Kadikalesi on a mound in Kusadasi, Aydin. In addition, glazed and decorated ceramics from the 12th and 13th centuries, various jewelery, knife handles, belt buckle, ivory martir (religious martyr) ivory reliefs of the saints are on display. In addition, the seal stamps from the Byzantine period constitute an important collection. 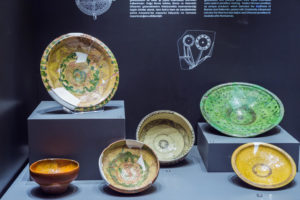 The terracotta pottery samples, oil lamps, glass artifacts, golden crowns, diadems and various jewelery belonging to various periods obtained during the excavations of the ancient city of Alabanda in Cine district of Aydin are exhibited. Also the statue of the Roman emperor Augustus and the headings of Ante are important works of Alabanda. 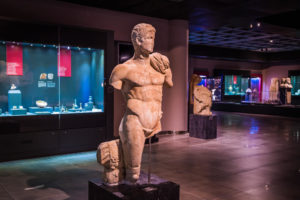 The findings of the Tralleis excavations in the center of Aydin are exhibited in this hall and the finest examples of Tralleis sculpture from the Hellenistic and Roman periods are exhibited. In addition, terracotta pottery samples, oil lamps rytons, fragrance bottles, glass artifacts, gold diadems, rings, earrings and various jewelry samples, as well as children’s toys made of terracotta are on display. 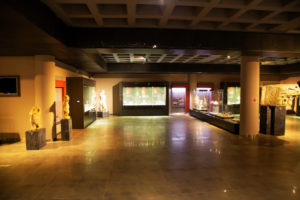 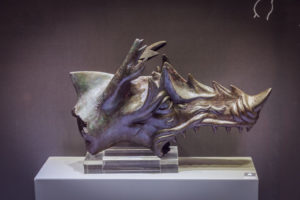 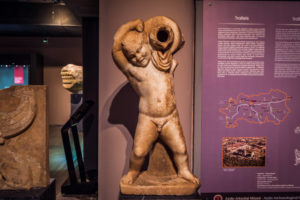 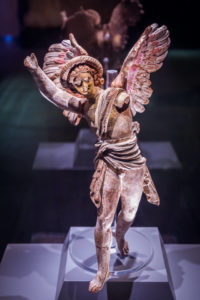 Among the most important works of the museum are painted Eros figurines made of terracotta from the Hellenistic period and the cremation vessel with the reincarnation scene. The ornament belt on the work depicts the goddesses of destiny moiras, the soul of the deceased, the god of the underworld, the judges, and the three-headed dog kerbaros, the watchman of the underworld.

In the excavations of the ancient city of Magnesia (Menderes Magnesi) in Germencik District of Aydin, samples of terracotta pots, oil lamps, figurines, various sculpture samples, ring stones, jewelry samples, bone and ivory artifacts are exhibited in the Basilica of Magnesia. In addition, the Skylla headings, the statue of Apollo and the Metrodoros Hermesi are the outstanding works which are located in the Basilica of Magnesia, where the legend of Skylla in the Odyssey of Homer are visualized. 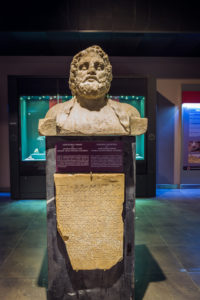 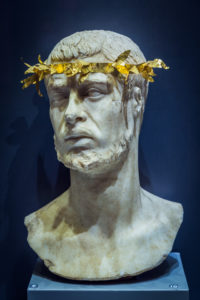 Sculptures such as marble busts belonging to Roman Period, statues belonging to the stage building of Nysa Theater, embossed steles, Yunuslu Cocuk Statue are exhibited in the excavations of Nysa Ancient City in Sultanhisar district of Aydin. 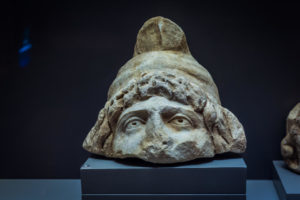 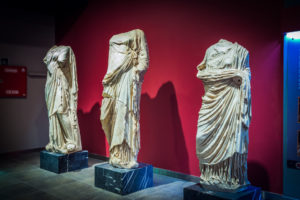 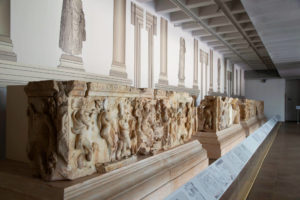 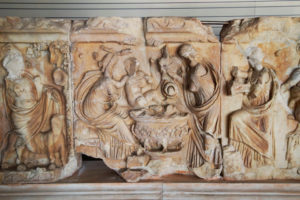 In the mosaic hall, the mosaic brought from the Orthosia Ancient City in Yenipazar District of Aydin to the museum is exhibited. The mosaic is the floor mosaic of a Roman villa dating back to the 2nd century BC. The mosaic consists of four main panels and the surrounding borders.

Curbs have various animal figures and geometric motifs. In addition, an interactive “Gladiator Fighting Scene was performed based on the gladiator figures on the Orthosia mosaic. 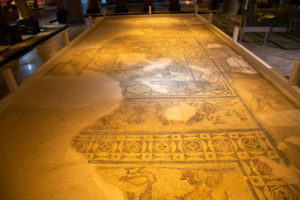 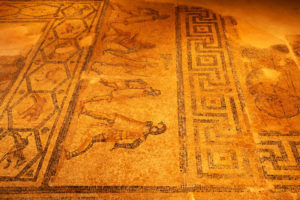 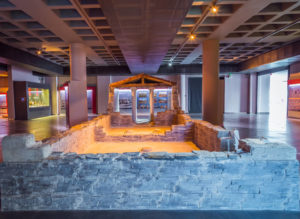 In the stone artifacts hall, sarcophagi, Ostoteks and tomb steles, which are important places in the museum collection, are exhibited with sculptures, busts, heads, altars, burials and statues from various periods which consist of ancient cities and settlements around Aydin.

In addition, the patron god of shepherds and flocks, Pan is one of the outstanding works of the museum with its evil smile. 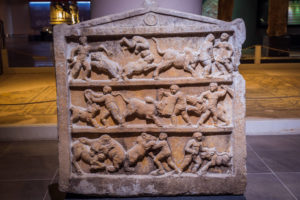 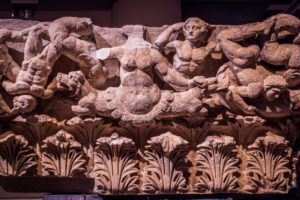 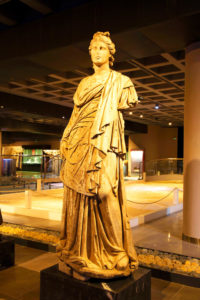 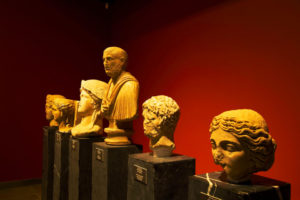 Coins belonging to the Lydian Period, Classical Period, Hellenistic Period, Roman Period, Byzantine Period, Seljuk and Ottoman Periods are exhibited in the showcases in the coin section where a chronological exhibition is held. In addition, four different treasures were exhibited in addition to the city coins of the ancient cities in the area of ​​responsibility of the museum. Among the treasures, Kizildere Roman Collective Findings which consist of silver coins belonging to 29 emperors and 9 empresses between 40-270 BC, stands out as a rare collection. In the coin section, the coin printing technique was visualized with mannequins in the ancient period. 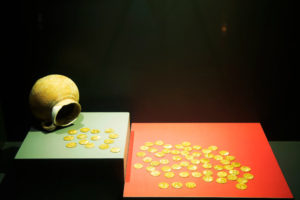 In this section, the artifacts obtained from three grave rescue excavations made by the museum are exhibited.

In the entrance section of the Aydin Archeology Museum, a 15-minute presentation of the museum and its ruins as well as short 5-minute introductions from the television screens in the museum exhibition halls are made to the groups visiting the museum collectively. It is a contemporary and modern museum with an interactive presentation application that enables the viewing of three-dimensional images of some of the unic works exhibited and obtaining brief information.