DIFFICULTY LEVEL OF THE TRACK: The course is a 14 km long climb. It is difficult to climb. (7 – 8 hours)

FEATURE OF TRACK: The trail starts from the western end of Gullubahce Mahallesi on the Soke – Doganbey highway and passes through the ancient city of Priene. The exit of the ancient city starts with bare ground through the pine forests. It is reached by a sloping road approaching 100% made by carving rock hard limestone at 370 altitude. After a break here, when a difficult climb to the crossing point of the Samson Mountain at an altitude of 945 m from 370 meters ended, a 4-hour period passed. Then, at the end of a horizontal forest road, you can reach the Kursunlu Monastery right after the descent with a view of Kusadasi Bay, Nallica Plateau and fountain. After that, thermal plants near Davutlar are reached through plant tunnels formed by maquis. If you have time, you can relieve fatigue in the hot thermal pools. RESTING PLACES: The first break in the ancient city of Priene photo break, the second break Miletos, Didim, Lake Bafa can be seen from the bird’s eye hill with an altitude of 370. The third and main break after the water fortification from the Madara Fountain is the summit of Mount Samson. The fourth stop is Nallica Plateau and Kursunlu Monastery.

The Priene Z Track is a very difficult 14 km track. Your adrenaline will ceil along the track. First you will witness the magnificent structure of the Priene Z. 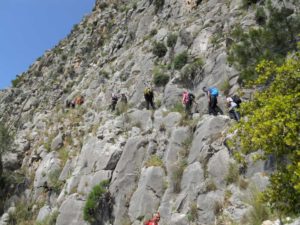 The ancient city has had a great advantage over the history of the attacks from the sea and the environment due to its location on a steep rocky terrain of 370 meters which was founded 15 km southwest of Soke. 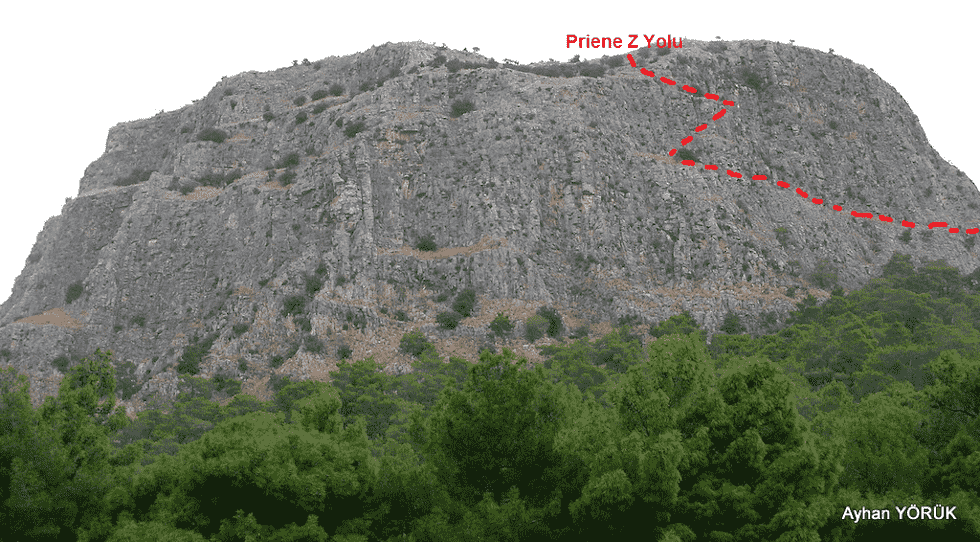 It is thought that the ancient city of Priene, which was first accessed by the ancient sources in the 7th century BC, was founded in the 2nd century BC. Priene, which is part of the Ionian civilization, is one of the 12 Ionian city states, including Ephesus and Miletus. The grid system developed by Miletian architect Hippodamus is the most important factor in the recognition of Priene’s name in the world. The grid system, which is also accepted as the pioneer of city planning in the world, means a grid-shaped city plan. The city streets in Priene are built with stairs because of the sloping terrain which usually reach a width of 3-5 meters. The port of the city was buried with alluviums carried by the Buyuk Menderes River and remained under the territory of the Buyuk Menderes Plain which is enriched with maritime trade, bearing the name of Naulokhos. Among the most important buildings of the Priene Ruins, which are full of fertile lands, are the Demeter Temple, the Athena Temple (4th century BC), the ancient theater with a capacity of 5,000, the agora, the Temple of Zeus, the bouleuterion (150 BC), the upper gymnasion, the lower gymnasion, the Egyptian Temple. It is possible to count the house of Alexander the Great, the Byzantine Church, the necropolis and the residential areas.

Priene Ancient Theater was built in 350 BC with a capacity of 5 thousand people. The statue of Athena, made of gold and ivory, is one of the most important symbols of the city in front of the Temple of Athena, which was built in the name of Goddess Athena at the most dominant point of the city. Today, some of the altar section of the Temple of Athena can be seen. The ancient city of Priene had three entrances, one in the west and two in the east. The East Gate which is the main entrance of the city is located to the north-east of the theater street, which is reached after a long steep slope.

In order to feel the texture of the city and experience the sense of travel in time, one needs to look at the reconstruction prepared by Hoepfner and Schwandner in 1986. This drawing, which reveals the locations and city plan of all the architectural structures in the city, makes you feel the atmosphere of the city.

You must be careful when climbing the Royal Rode. The landscape will be worth your excitement If you go in the spring, you will see the ‘Hairy Bell ara, an endemic species of the peninsula, from time to time. This flower was the second in 2016 in Expo Antalya with the theme of ‘flowers and children‘. Do not pick this flower!

You will see the Latmos Mountains, Buyuk Menderes Delta, the Bafa Lake and the Aegean Sea from 370 hills. Madara Fountain for water and Carsak ground climbing will meet your need for water. When you cross the Samson Mountains, you will see Kusadasi Bay and Samos Island from afar. After making water supplementation from Nallica fountain, give your last break at Kursunlu Monastery. After the exit of the monastery, you will enter and exit the plant tunnels for 5 – 6 km. Walking When you reach the 70 m altitude in Davutlar, the pleasure you see will be worth your fatigue.