Miletus, the capital of civilization, culture, art and science is one of the most important cities with its 3. 500 years in history of humanity. The basis of positive science is accepted as the home of people who question, observe, and try to understand nature. Miletus, also known as “The city of philosophers”,,has raised many historical figures such as the philosophers Thales, Anaximandros and Anaximenes and city planner Hippodamos. Miletus, where free thought prevailed 2,600 years ago, became a center of attraction, became the largest city of Ionian civilization, and became a cosmopolitan place where people from all over the world lived and became the capital of civilization.

The Miletus Museum is an impressive archaeological site for visitors, featuring unique ruins and interesting artifacts. The fascinating atmosphere and nature of Miletus, once inhabited by philosophers in this ancient land, where free thought prevails and where science was born, is a privileged cultural region where intellectual pleasure will be experienced.

Miletus is located on the southwest border of the Menderes Plain, between Soke and Didim, in a region with no traffic. Instead of the big cities, there are several beautiful villages in the vicinity: Doganbey in the north, Batikoy in the west, Akkoy in the south and Balat right next to it. Balat was named after Palatia, the late ancient name of Miletus. Dilek Peninsula National Park extends to the Menderes delta west of Miletus. Miletus Antique City has a pastoral character with its location and the influence of the small settlements around it. 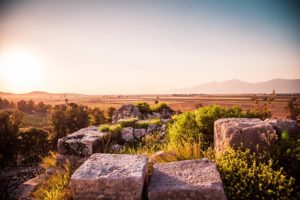 History Of The City

Miletus, once the largest city of Ionia, was a port city and commercial center in the 7th century BC.

In ancient times, Miletus was known as the cradle of the Ionian Philosophy of Nature, a school of thought in the early sixth century. Located at the entrance of the Gulf, Miletus was the center of trade routes between the Mediterranean and the inner cities. However, the city loses its importance as a result of the invasion and destruction by Persians. During the Byzantine period, the settlement began to diminish with the emergence of diseases in the city, which filled the sea with alluviums brought by Greater Menderes River and turned into swamps in time. It disconnected from the sea with the effect of alluvium and about 10 km. entering the city and completely lost its importance.

In the 13th century AD, Palatia (Miletus) gained great importance as a port city in the Menteseogullari Principality and caravanserais and mosques were built in this period. One of these mosques, Isa Bey Mosque Complex was restored between 2008-2011. At the beginning of the 15th century when the Ottoman Empire came under the rule, Palatia (Miletus) ports lost their importance in the region with the change of trade traffic routes. “Balat” village remained from the famous Miletus city.

After an earthquake in 1955, the village was moved to its present location, south of the old city area.

Today, in the ancient city with the theater and the castle located on the caravanserai, Faustina bath, Serapis temple, agora, Ilyas Bey Complex, port monument and the ruins of the city area can be visited.

The three great theroristis who lived within the boundaries of our district in ancient times, based on the discovery of today’s scientific realities with their logos-based, logical philosophy-based forms, instead of mythology, mythological myths, and observation.

The School of Miletus constitutes the beginning phase of philosophy in the history of philosophy and is the pioneer of the philosophical tendency called as philosophy of nature. It showed the first systematic thinking and efforts to establish existence that emerged in 600 BC. Later, the philosophers who are the founders of systematic philosophy such as Socrates, Plato and Aristotle will evaluate the development of thought opened by this school.

The philosophers of the School of Miletus uniquely investigate the formation of the universe, the life of living things, meteorological phenomena with the belief that the power of reason is infinite.

The Miletus school is considered to be the first pioneer of materialist philosophy on the other hand, since its representatives are natural philosophers and seek substance-based answers to their questions.

Thales, the first truly philosopher in history and the first scientist to whom some mathematical discoveries were attributed, lived in Miletus between 640 and 550 BC. Thales lays the foundation of positive science with his philosophical inquiries and findings. In addition, his knowledge of astronomy and geometry, and scientific studies with the political views of the western society provides progress.

Anaximander who is student of Thales, the second philosopher of the Miletus (Ionian) School, lived between 610-546 BC. Anaximander is important in terms of his experimental and logical philosophical thought, his preparation of the ground for the scientific revolution with his thoughts about the formation of the universe, laying the foundations of the Theory of Evolution and his scientific studies.

Anaximenes, the student of Anaximander, the third and last philosopher of the Miletus (Ionian) School, lived between 550 and 480 BC. Anaximenes approaches the problem of existence with logical philosophy. The concepts of spirit and matter for the first time in existence; gives an important idea and innovation to the field of philosophy by considering the four basic elements.

Archaeological research in Miletus started in the late 19th century. Some of the sculptures and architectural pieces of Miletus are exhibited in the Museums of Berlin today. Roman Miletus Agora Gate is a famous monument that has almost completely moved to Berlin. Most of the finds obtained from the first excavations are stored and exhibited in Istanbul and Izmir Archeology Museums. The finds recovered today are exhibited in the new Miletus Museum that opened in 2011. University excavations in Miletus are currently being carried out by an international team led by the University of Hamburg.

The theater, which rises directly opposite the visitor car park, was built in the late 4th century BC and expanded considerably in the 1st and 2nd centuries. The Cavea section is so large that it forms a landmark not only in Miletus but in the entire Menderes Plain. 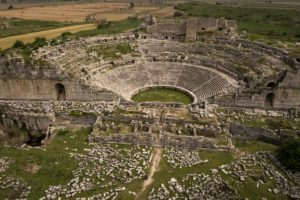 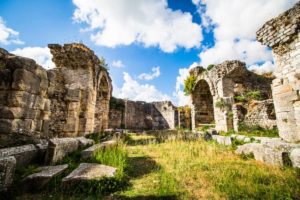 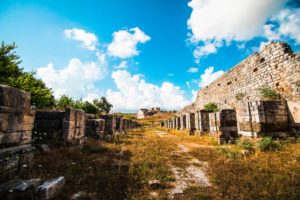 It is just 150 meters from Miletus theater; It was built by the Roman Emperor Marcus Avrelius. This bath, built by the Emperor on behalf of his wife Faustina, was renovated in certain periods.

The statues of Nusa found here are currently exhibited in the Istanbul Archaeological Museum. A large pool of the bath and a lion statue used as a fountain on the side of the pool are in the Miletus Museum.

The Faustina bath is quite well preserved. After extensive restoration works in recent years, the size, spatial diversity and rich interior of these complexes have emerged. Apart from the Faustina Bath, there are many small baths, such as the Humeitepe or Capito Baths, as well as the Southern City Bath to the south of the Ilyas Bey Mosque. 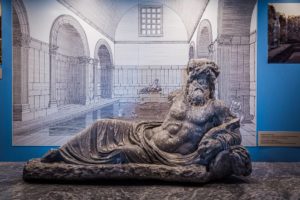 You can reach the ancient city via Soke – Balat or Soke-Didim highway by private car or taxi.

However, the entrance fee for those who do not have museum card is 12 TL for 2019.