Nysa: Home of Science and Culture of Ancient Times

Nysa is an ancient city built on the slopes between the mountains. Nysa has magnificent ruins where nature and forest meet with marble and trees that dance with historical buildings. Nysa is the city of Dionysus who is the God of ancient times, wine, entertainment and pleasant times. The city is an attractive stop for visitors with its stadium, bridges, theater and other ruins built on arches and vaults. The famous geographer Strabo who lived 2,000 years ago, walking the streets and see the places where he lives, exploring the city where God Dionysos was born will be a good memory in the memories of the visitors.

Nysa Ancient City within the borders of Sultanhisar district of Aydin, today 3 km far from the north of the Aydin – Denizli D320 highway and 30 km to the east of Aydin. Nysa is located on a sheltered slope at the southern foot of the Cevizli – Aydin Mountains, in the fertile basin to the north of the Buyuk Menderes (Meandros) River. Nysa is located on the main trade route that existed from the Late Hellenistic Period.

Nysa, in ancient times, a fast-flowing river formed a deep strait and divided into two cities, the city was connected by a bridge. There is a gymnasium and stadium to the west of the stream bed that divides the city in two, the remains of a Byzantine building and library to the north, and a theater for 10,000 people to the northeast of the library.

The library has two floors and is the best preserved ancient library in Anatolia after the Celsus Library in Ephesus. To the east of the stream bed are the agora, the parliament building and the Roman baths. The necropolis of the city is located on the Akharaka road which is the sacred area of ​​the ancient city in the west.

Especially under the Roman Empire, during the Roman period, additions were made to the buildings in the ancient city. The city reached an important point in the cultural sphere, Buildings, streets and squares built on both sides of a very steep strait are supported by vaulted infrastructure.

Nysa was a famous city especially in the field of education in ancient times and Strabon was educated in this city. Gymnasion and library remains in the ancient city constitute these educational buildings in Nysa.

In the 13th and 14th centuries, when the Mentese and Aydinogullari Principalities dominated the Aydin region, Nysa was abandoned and settled in the modern settlement of Sultanhisar in the south. 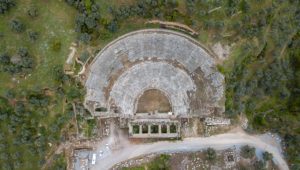 * THE CITY OF DIONYSOS: In mythology Hermes entrusted the child Dionysos to the nymphs of Mount Nysa to grow. On the other hand, people of Nysa used sections of the life of Nysa god Dionysus in the podium friezes of the stage building of the theater they built.

* EDUCATION AND CULTURAL LAND: One of the buildings used for educational purposes in the city is the gymnasium where young men are trained; the other is the library building, one of the well-preserved examples of Anatolia. Strabon, the famous ancient historian and author, who took a significant part of his education in Nysa, describes the city as follows in his work “Geography:

“A double city spread over the foothills of Mesogis Mountain (Aydin – Cevizli Mountain) and a double city divided into two by a stait formed by floods. ”

* ARCHITECTURAL AND ENGINEERING WONDER: The buildings, theater, especially stadium, tunnel and three bridges built in harmony with the topography of the city, offer the most beautiful examples of Roman architecture and engineering to its visitors.

Since the beginning of the 20th century, the archaeological museum of Izmir, the parliament building and theater in the 1960s carried out excavations in the ancient city, which attracted many researchers. Since 2017, Ankara University has been carrying out excavations on the streets of the Forum – Carsi Basilica, Columnar Street (Avenue 1), the west side of the city, the Doric columnar – mosaic structure and the street – street system on the eastern side of the city.

One of the well-preserved buildings of Nysa, the Theater covers an area of ​​approximately 73×99 meters. The theater, which was thought to have been built in the late Hellenistic period (2nd half of the 1st century BC), has a cavea with a horseshoe plan. The podium friezes of Scaenae frons and three statues of women dressed as Ephesus Herasi, Melpomene, one of the muse and other sculptures, are exhibited in the halls devoted to Nysa Ancient City in Aydin Archeology Museum. 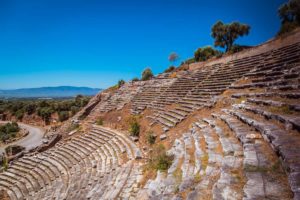 Agora, which is located on the east side of the city, is a large market place covering an area of ​​113.5 meters in the east – west direction and 130 meters in the north – south direction. It has 88,5 m. x 102 m. This building is dated to the Late Hellenistic period due to the architectural features of the eastern stoa. Agora is surrounded by stoa in double row column Ionian order in north and east and single row column dor order in south and west. In addition, behind the North Stoa, there is a row of shops with vaulted tops.

As Strabo mentioned, this structure reflects the outstanding features of Roman architecture. It is built in accordance with the topography and it has an impressive infrastructure. Partly preserved on both sides of the valley, the seating rows and infrastructure in the northwest corner of the structure are well monitored.

Built on the west side of the city around 130 BC, it was used as a library, meeting room and court room. The outer dimensions are 25 m x 14 meters and the main interior dimensions are 13.3 m. x 8.7 m. The building has two floors and 16 book shelves that can be reached through wooden corridors. A staircase leads to six archive rooms on the second floor. 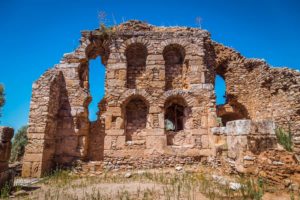 Gerontikon (Old People Assembly) The Parliament Building is located to the east of the city and to the northwest of the agora. The main street on the north – south axis of the Agora is separated by Plateia, Street 2. 27.84 m. x 23.55 m. building complex consists of propylon, front courtyard, two-storey scaenae frons and cavea. The building is entered through the propylon on the main street which has a seating capacity of approximately 700 people. 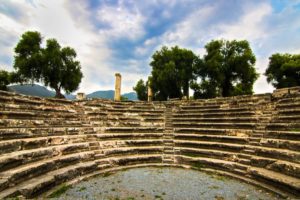 Basilica of the Grand Bazaar

The Grand Bazaar Basilica crosses the Gerontikon and Agora on the terrace to the southeast of the theater was identified fort the first time in 1994 with a figurative headboard which the modern road leading to the village of Kavakli. During the Roman Imperial period, the most central part of the city was built adjacent to the forum, judicial, commercial and administrative courts, as well as trade is being done, sarrafs and some merchants can open a number of permits; bazaar basilica, which are closed places where the visitors and the protesters are protected from the sun or bad weather, are the structures which are separated by three columns and three naves respectively.

Columnary Street (Plateia) In the eastern part of Avenue 1, the monumental entrance providing access from the street to the forum area and the Bazaar Basilica is 66 m. south of the site. The Monumental Entrance, whose 23-meter section was unearthed, has three doors and four ”aedicula” facade architecture with eight columns.

The results of the georadar studies carried out in 2013 in this area, revealed that there might be a forum on the terrace on the east side of the Bazaar Basilica which is in a central position of the city. The Basilica of the Bazaar is thought to be a oa stoa basilica uzanan extending along the eastern edge of the forum area. 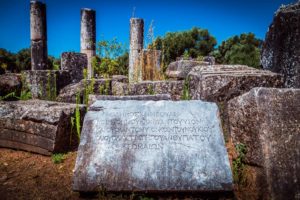 You can go to Aydinhisar district from Aydin Efeler by public bus, minibus or private car. Visitors can reach the ancient city from the town center by private car or taxi.